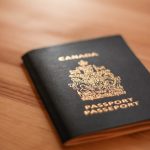 The Canadian passport has been ranked the fourth-most powerful in the world in the latest version of the Passport Index.

Travelling to a foreign country is impossible without a passport, which is why the power of status of a passport depends primarily on visa-free travel privileges granted by the document.

Passports of comparatively less-developed nations like St. Kitts & Nevis and Antigua & Barbuda often rank higher than other more affluent nations based on the visa-free travel factor.

Currently, the Passport Index, which compares passports of different nations and ranks them on the extent of global mobility enjoyed by its holder, rates Germany as the top-rated passport in the world. Holder of a German passport can travel to 161 countries without needing a visa.

Canada is now ranked on a par with passports issued by Switzerland, South Korea, Japan, Ireland, and the U.S. in terms of visa-free travel.

The jump in rankings is significant because, apart from the U.S. and Ireland, Canada is the only other country with this passport index rank that offers an investment immigration program.

The U.S. EB-5 visa, apart from being mired in controversies, requires creation of 10 jobs to qualify. The Irish program, although offering multiple investment options, is yet to catch the interest of the global elite.

The Canadian program, on the other hand, has been a perennial favorite among wealthy applicants, seeking citizenship by investment options, especially those from China. Until 2014, Canada had a federal program that ran concurrently with the Quebec Immigrant Investor Program (QIIP). However, the federal program was terminated amid much controversy, meaning wealthy candidates seeking permanent residence in Canada through a passive investment program may only apply under the Quebec program.  The QIIP offers permanent residence in lieu of a one-time investment in a government guaranteed program.

Since visa-free travel is an important consideration for wealthy applicants comparing different programs, the rise in rankings of the Canadian program can help boost its popularity.

The importance of visa-free travel can be assessed by the fact that demand for citizenship by investment programs offered by St. Kitts and Antigua fell after Canada withdrew this privilege.

The decision was prompted by lack of careful due diligence and fears that the two nations were issuing passports to investment immigration applicants without proper verification and oversight. Despite various diplomatic overtures by the two nations, Canada has refused to reverse its decision.

Irish IIP to Gain as the Only Investment Immigration Program Linking the UK and the EU
February 9, 2021
Go to Top
%d bloggers like this: