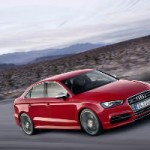 Increasing pace of the US economic recovery combined with Volkswagen’s attempt to focus on attracting younger customers to its luxury automobiles has helped boost US sales by 23 percent.

Total deliveries touched 16,867 units with around 2450 units of the popular A3 sedan, with a starting price tag of $29,900, being sold in the US market. A4 sedan sales rose by 3.3% while the Q5 SUV saw a 15% rise in demand. All this contributed to Audi posting record monthly sales for the 42nd consecutive month. Deliveries in the first half of 2014 have exceeded Audi’s annual sales figures in the pre-recession era.

This performance is helping Audi catch up with current market leaders like BMW, Mercedes-Benz, and Lexus and is being attributed to Audi’s new strategy of focusing on young car buyers. Audi is positioning itself as a unique brand with better understanding of what first time young car buyers want. The fact that not many people own an Audi too is working in its favor.

The impact of A3’s launch is evident from the fact that Audi’s share in the imported luxury car market has risen from 9.7% to 11.5%. ahead of GM’s Cadillac and Honda’s Acura models, the A3 sedan is the fourth most popular car in the luxury car segment.

However, Audi still has a long way to go to catch up with its larger rivals.

BMW and Mercedes posted a month-on-month increase in sales by 12% and 8.6% respectively. These brands sold more than 150,000 cars each in the first half of 2014, significantly higher numbers and margins as compared to Audi. The 5 Series sedan is BMW’s most popular product while Mercedes E-Class sedan witnessed significant jump in deliveries.

Toyota’s luxury car sales rose by 10% with the entry-level model, Toyota City, being the most preferred car amongst buyers. GM’s Cadillac underperformed with just a 0.1% increase in sales but the SRX SUV and Escalade SUV witnessing a 19% and 84% increase in sales.