The costs of the world’s investment immigration programs, highlighted by the World Economic Forum, illustrate how different countries value residency and citizenship.

At the top of the list, French residency-by-investment will set you back $14.6 million. At bottom end of the scale, a Latvia permanent residency visa costs just over $50,000.

The numbers suggest French residency is worth 286 times as much as the right to live in Latvia. Both are members of the European Union, both have the euro. 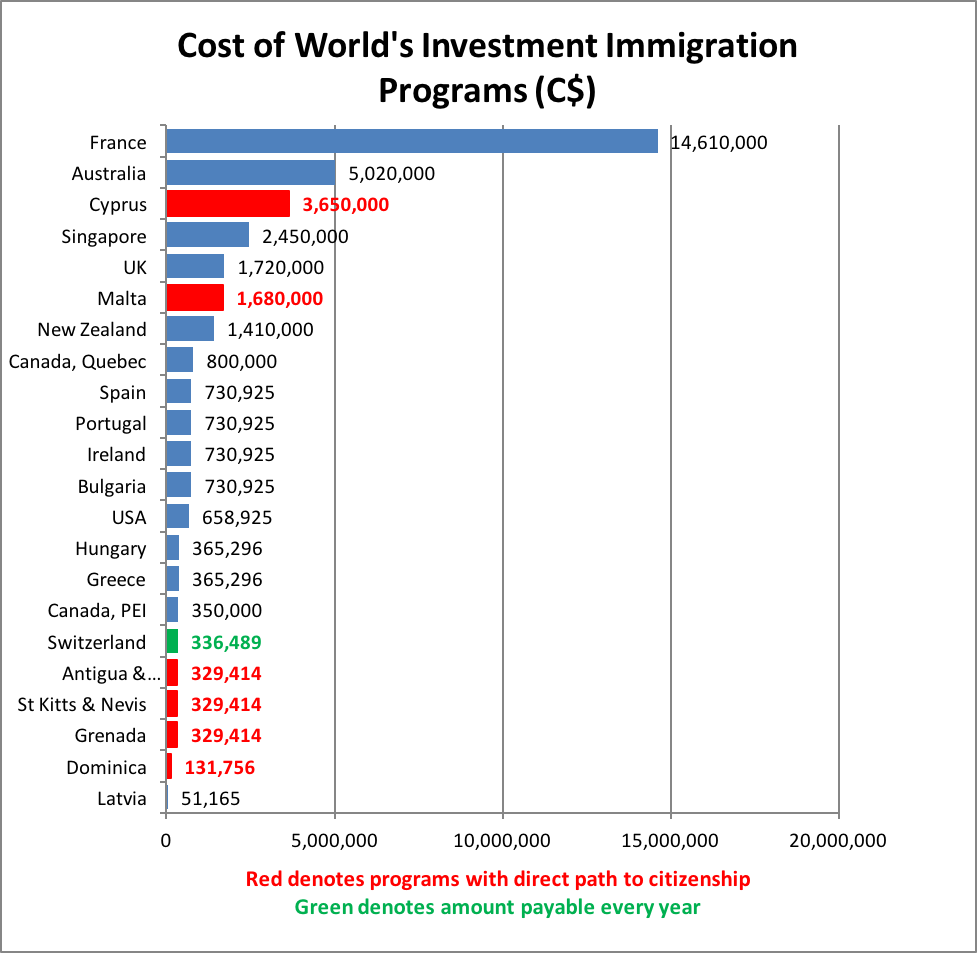 But in Cyprus the investment requirement is $3.65 million.

There are a number of factors in play when setting these investment amounts. Different countries are aiming for different markets – Cyprus, for example, is strategically placed on the edge of the Middle East, making it accessible to rich Arabs looking for a second citizenship as an insurance policy.

The Caribbean programs have been criticized over the years for attracting criminal elements looking to hide ill-gotten gains. But they have clean up their collective act of late, now hiring outside countries to conduct strict vetting procedures into the applicants that come forward.

In Canada, the Quebec Immigrant Investor Program (QIIP) is controversial for different reasons.

Despite introducing a requirement that applicants declare their intent to reside in Quebec, many opt to move elsewhere when their permanent residency is granted. The high net worth investors mainly end up in Vancouver or Toronto, and are being blamed for massively inflating the housing markets in those two cities.

QIIP is the only passive investor program that still exists in Canada, after the previous Conservative government shut down its own version, which had similar requirements, back in 2014. They launched the Immigrant Investor Venture Capital Pilot Program in its place, but that has been a failure from the start, attracting less than 10 applications during the past 2 years.

The P.E.I. program requires the investor to actively manage a business in the province, setting it apart from the completely passive Quebec version.

Investment immigration is a growing industry with benefits on both sides.

For the investor, it can mean a new life in a new country, or a passport which opens up new frontiers in terms of visa free travel and business opportunities.

For the receiving country, the programs are becoming a key revenue stream in difficult financial times. Some of the major victims of the global economic crash have attracted crucial injections of capital into their economies through such programs.