The European Union has taken a major step towards imposing an EU visa restriction on Americans wanting to travel to Europe. 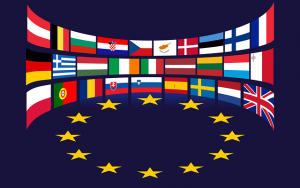 The European Parliament has voted in favour of ending visa-free travel for Americans, a move designed to up the ante on the US in negotiations over reciprocal visas.

While the vote is non-binding, it can be viewed as an indication to the US that the issue is not going to disappear.

The visa wrangle centres around new EU rules implemented in 2014 requiring all nations granted visa-free access to the bloc to give the same right in return for all European citizens.

Canada, Australia, Brunei, Japan as well as America were told to grant visa-free access, or see a visa-requirement imposed in the other direction.

The other four countries – including Canada – have either lifted restrictions or will do so in the coming months.

But the US – which requires a visa for citizens of Bulgaria, Croatia, Cyprus, Poland and Romania – is yet to implement or indicate any visa policy changes.

Industry experts say the EU move is just posturing – and that tourism dollars from America are too valuable to risk imposing a visa restriction.

In Canada’s case, the issue became linked to the passing of the Comprehensive Economic Trade Agreement (CETA).

CETA is expected to become law after it was voted through by the European Parliament in February.

Opposition, particularly from Belgium but also from Romania and Bulgaria, had threatened to derail the deal at the final hurdle.

The deal must now be ratified by Canada’s parliament.

Canada also lifted a visa restriction for Mexicans on December 1, 2016. There was a marked increase in asylum claims as a result, although the numbers dropped in April for the first time since the visa requirement was lifted.

Claims had steadily been increasing in 2017, to a peak of 110 in March, but April bucked the trend with 89 Mexicans claiming refuge.

Coming from a visa-exempt country, Mexicans now only need an Electronic Travel Authorization (eTA) to come to Canada, obtainable online for a small fee. Figures show more than 72,000 eTAs were issued to Mexicans between December 1, 2016 and March 10, 2017.

Canada has threatened to re-impose the visa restriction if it receives too many asylum claims, although it has not publicised any limit. It has been reported that 3,000 claims in 2017 would see the policy reviewed.

The increase will be closely watched, although numbers remain significantly fewer than 2009, when the previous Conservative government imposed the visa restriction because more than 9,500 asylum claims were made by Mexicans.

Government analysis says lifting the visa requirement will cost $433.5 million over the next decade, partly offset by an expected $171.6 million boost to the economy through increased tourism, investment and trade.